Very pleased to announce that Alex (the iSpiny programmer) has been awarded a PhD in computer science from Oxford University! Congratulations Alex!

Here’s a photo of his dog, Pippin, wearing a white bow tie in celebration 😊 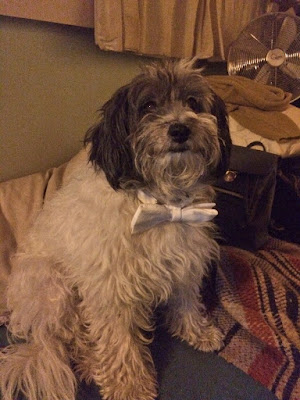 Bird vocalisations are valuable to biological, ecological and taxonomic research. Studies can require large quantities of recorded vocalisations, and these are usually sourced from bird sound libraries. One of the largest, easiest to use, and fastest growing of these libraries is the wonderful xeno-canto.

iSpiny are pleased to announce that we are now able to curate the recordings sent in by ChirpOMatic users, and post the best on xeno-canto.

How will it work?
We always love to receive your emailed recordings, even if they're not academic quality! If it is a particularly great recording that's appropriate for xeno-canto, we will get in touch with you for permission to post it. If you have any extra details such as whether you saw the bird and its behaviour, do let us know. This extra data can be very useful to researchers. Once we have your permission we’ll post the recording and send you the link.

We have already uploaded over 30 recordings, from 26 recordists and a total of 10 countries!

You can see the current list here:
ChirpOMatic recordings for science

Xeno-canto aims to be the the ultimate bird sound resource so let's do our bit in contributing!

To find out more:
ChirpOMatic web page
ChirpOMatic in App Store
Posted by spiny at 13:02 No comments:

Featured in the App Store!

Our ChirpOMatic automatic birdsong identifier has been chosen by Apple for their 'Celebrate Springtime' selection of apps! We are thrilled!

ChirpOMatic, our shazam-style app for identifying birdsong has been updated, the first of several updates planned for 2016. As well as the lovely new design by Sam (IAmSam Creative), new birds have been added, the analysis has been improved and made faster, and it is now possible to go back and see the results from earlier recordings.

Probably the biggest new feature is that the app now supports the Apple Watch! So if you are out and about and hear a bird, you no longer have to fumble around for your phone, just tap the button  on your watch and record it straight away. You can make as many recordings as you like and they will automatically transfer to the phone. Then tap ‘Analyse’ on the phone to get the results.

The microphone on the watch is surprisingly good and the recordings are of similar quality to those made on the phone. Something to watch out for is that the microphones are on the left side  of the watch, so be careful that your sleeve doesn’t rustle over the phone while you are recording.

Click here to see ChirpOMatic in the App Store 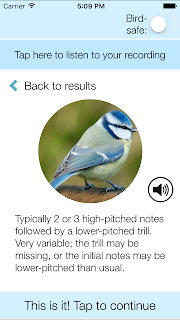 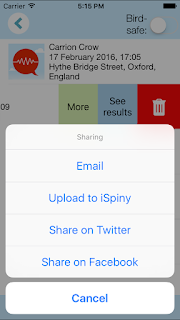 ChirpOMatic is having a makeover!

ChirpOMatic, our automatic birdsong recognition app, is having a makeover! The app has been redesigned by Sam at iamsamcreative and we are thrilled with the results. He has cleverly transformed the app, yet kept it recognisable. Thank you, Sam!

The app will be updated very soon with this great new artwork.

Click here to see ChirpOMatic in the App Store 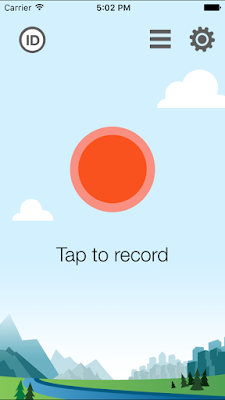 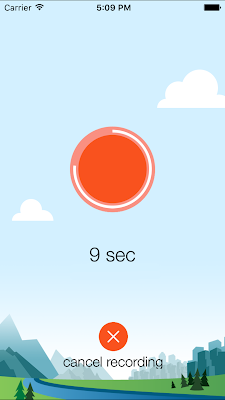 The ones that fail

This quiet summer spell has given us a chance to catch up on analysing the recordings that we've been sent from ChirpOMatic (our new automatic birdsong identifier). And as well as listening to the successful recordings, we've also analysed the reasons that the app has failed to identify some sounds, and we noticed a strange trend. The app cannot identify a bird if it can't hear it - but the reason for this is different for each of the three versions of the app.

The majority of failed British recordings are as a result of the wind blowing across the microphone - the wind creates a loud roar on the recording, masking everything else (a scenario familiar to anyone who has tried to video an outdoor wedding).

The majority of failed German recordings are due to people continuing loud conversations while they record the bird.

And the majority of failed Swedish recordings are because the bird was so far away and so quiet that it was masked by the sound of the internal workings of the phone.

Typical Swedish fail - this was not the quietest, but listen, you can hear him breathe!

There is quite a bit of overlap, particularly when it comes to talking over the recording. We have some excellent recordings of people calling their dogs, slurping cups of tea, making bird noises and one whole series of recordings of a family having breakfast while in holiday in Spain (I suspect the children were secretly recording). Here are a couple of other favourite fails:

So in conclusion, there are just a couple of simple rules to remember when using the app:
1. The bird needs to be the loudest sound. Talking is actually ok as long as it is quieter than the bird.
2. The bird needs to sing for a minimum of around 4-5 seconds. Two or three single chirps is not enough.

Next time, I'll post some of the best recordings that we've been sent :).

See ChirpOMatic in the App Store

Here we are in the quiet time! Birds fall quiet in mid-Summer - singing uses energy and also attracts predators, so it isn’t sensible to sing unless you have to. Once the breeding season is over, there is no longer a need to sing to attract a mate and protect territory, and on top of that, summer is the time to moult into fresh, new feathers so during this time the bird is slightly less nimble and less able to escape from predators. It’s best to keep quiet!

As developers of bird song apps, we are very aware of the quiet months. It’s a quiet time for us too!

Earlier this year we released our Chirpomatic app for Shazam®-style automatic birdsong identification. We released it in time for the peak birdsong season and we’ve been delighted with the number of recordings that we have been sent, both by email and uploaded to our website. We listen to every recording we are sent, and reply to as many as we can but sometimes we’ve been overun, so thank you to every single one of you who has sent a recording!

We’ve also been looking into the reasons why the app sometimes fails to identify the bird, with some interesting results! More on that soon…

If you would like to find out more about Chirpomatic, tap here for the App Store. 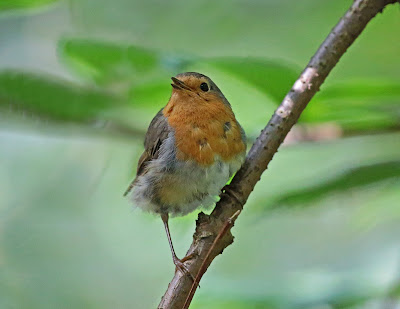 The splendid photo of a moulting robin is by vil.sandi
Shazam® is the registered trademark of Shazam Entertainment Limited and is not affiliated with iSpiny in any way.
Posted by spiny at 16:44 No comments: