Looking back over 2010 I can't believe how busy we have been! At the beginning of the year we were finishing off our British Bird Guide and had started planning the new slideshow feature that we intended to add to Chirp!, when suddenly Apple announced the imminent arrival of their groundbreaking device, the iPad. We immediately shelved all other projects and worked like crazy to get an iPad version of Chirp! ready for the launch. It was fun to be in at the very start of the iPad and I'm very pleased we did experience that, but no sooner had we finished the iPad version, but we had to start updating the apps for the new iPhone 4 and its new multi-tasking feature. At this point I was wondering if we'll ever we able to resume normal operations, but fortunately (for us, anyway) Apple took a break from producing new devices and we were able to get back to routine work.

During the summer Bird Guide Britain received a complete cosmetic makeover by Marcello at Wrinkly Pea, and we also added a slew of new features, then we resumed work on the slideshow for Chirp! It took way longer than we expected to get the slideshow working in just the way we wanted, in portrait and landscape mode, and in 6 languages, but it was finally released this month - a full year since we started on it! Here's hoping faster progress will be made in 2011!

Happy New Year to you all!
Posted by spiny at 13:20 No comments:

A bug crept into the last update of Bird Guide Britain and messed up the lists of seen birds and starred birds. We have made a fix which will return the lists to their previous state, but unfortunately if you have already gone through the app and corrected the list yourself, you will have to do it all again when the update comes out. We are really very sorry about this :(. We looked into all the possible ways of correcting the fault, but the more complicated the fix, the longer it would take to implement and test, so we decided that the best course of action is to release a quick fix as soon as possible to minimise the number of people affected.

We've asked Apple to prioritise the update (which they do in cases like this) so it should be out in a few days.
Posted by spiny at 10:23 No comments:

It's been a busy busy summer! We have a new member of the Chirp! family, Chirp! Canada, we've updated Chirp! USA with a huge batch of new birds, and an update for Chirp! Europe should be out this weekend with new birds and with buttons to change the language of the bird names inside the app. We've another big new feature for Chirp! that is nearly finished so more updates will be coming soon!
Bird Guide Britain gets another update very soon and that will complete all the commonly seen birds in Britain, plus most of the locally common birds. Once that is done, we can start adding the scarcer birds, and also finish the record keeping features.
I'm sad to say that there is dirty work afoot in the UK AppStore Reference section with some developers giving competitor's apps poor reviews. I thought we'd escaped but four 1 star reviews arrived on the Chirp page this evening - a bit odd as we've consistently received almost entirely 4 and 5 star reviews for the past 18 months! If you like Chirp or the Bird Guide, please leave a nice review for us if you have time :).
Posted by spiny at 22:29 1 comment:

I admit I was a bit dismissive of the competition, run by Natural England, The Guardian and The Oxford University Museum of Natural History, to name several rare species of invertebrates. After all, nobody has a problem with plant names such as Fucshia and Rhododendron. But now the results are in I freely admit that I was wrong - the names are wonderful! And I am sure that a newspaper article discussing the fate of the Queen’s Executioner beetle will attract the interest of far more people than an article about Megapenthes lugens! (To see the results of the naming competition, visit Buglife for a good summary).
I'm now such a convert to the cause that I think all common names should be decided by competition. It couldn't fail to produce better results than the dreary efforts of the official organisations. While preparing birds for inclusion in the Chirp! apps, I frequently find examples of official name changes, and they are usually for the worse, going for the purely descriptive. I was sorry to see that the Canadian bird sometimes called the Whiskey Jack - a great, original name with a very long heritage- is officially the Grey Jay. Grey Jay! Yes, it's grey, yes, it's a Jay, but give me Whiskey Jack any day.
PS I'm alarmed to see that apparently I haven't updated this blog since May! I'm sure I updated in June, but there's no record of it. We have continued to be ridiculously busy so maybe I forgot to press the "publish post" button. I shall try to be more diligent in future!
Posted by spiny at 09:58 No comments:

It's finally launch day for the iPad in the UK and much of Europe! And the iPad version of Chirp! will be available - it was approved by Apple around midnight last night, so just made it! If you are getting an iPad, or just browsing in an Apple Store, please take a look - the bird photos look great on the larger, shinier screen. Hold the iPad in landscape position to see larger bird photos, or in portrait position for a longer list to scroll through. 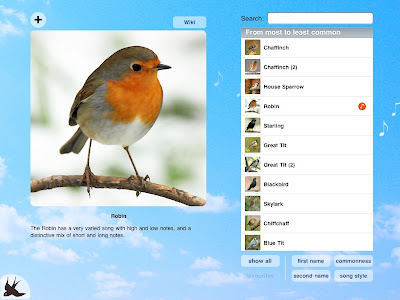 The last few weeks have been very busy, mainly due to the rush to finish the iPad version of Chirp! Europe before the release of the device in the UK. It's almost complete now, just a few phrases to have translated then it can be submitted to Apple - that will be a relief! Then it will be back to other urgent jobs such as updates of Chirp! and the Bird Guide. The next update of the Bird Guide is going to be particularly exciting because it will include the fantastic new artwork created by Marcello at Wrinkly Pea. Prepare to be stunned!
In between other work, we finished a huge new update for Chirp! USA which appeared in the store today. The update adds another 16 birds to the app: the California Towhee, Canyon Towhee, Abert's Towhee, Wrentit, Black-headed Grosbeak, Pygmy Nuthatch, Pyrrhuloxia, Verdin, Western Tanager, Blue Grosbeak, Red-shouldered Hawk, Black-billed Cuckoo, Bobolink, Pine Warbler, Swamp Sparrow and Yellow-billed Cuckoo, plus extra sounds for some birds. The same birds will be coming very soon to Chirp! for the iPad.
Posted by spiny at 19:56 1 comment:

It's just a couple of days before the release of the iPad in the US, and I'm thrilled to say that Chirp! will be there on launch day!
Chirp! Bird Songs USA Plus is the iPad version of Chirp! USA, redesigned to take advantage of the extra screen space. The most important feature is that all the images have been re-sized and re-edited, and should look stunning. This launch version will only work on the iPad, but we intend to make it a Universal app as soon as we can test it properly, so that if you buy the Pad version, you will also get an iPhone version.
We can't wait to see what it looks like on the actual device - like almost all the other developers we've had to develop for a device that we've never seen, which was... well, hmm, interesting ;).
So if you are in the USA, and are getting an iPad at the weekend, don't forget to look for us in the AppStore!
Posted by spiny at 16:10 No comments:

It's a big day today - our field guide to British Birds is finally in the AppStore! We've been working on it for so many months that it is hard to believe that it is finally out. Also a bit nerve-racking, waiting for the feedback! It only has 112 birds at present, but these include all common and locally common song birds, plus woodpeckers, owls, gulls, pigeons, parrots and the most common birds of prey, with photos, songs and calls. It's a hefty beast already! We will be adding more birds in regular updates until all common and locally common, plus many rarer birds are included. The first update is already well under way and that will add waterbirds - ducks, swans, geese and grebes.
The plan is that once it is finished, it will be adapted and translated for other European countries. It made sense to start with Britain because Britain has fewer birds, and we already speak the language ;).
Here's the link to the App Store: Bird Guide Britain
Posted by spiny at 20:28 9 comments:

Chirp! is an Apple Favourite!

Apple have chosen Chirp! USA as a Staff Favorite in the USA and several other countries, plus featuring Zwitschern! (Chirp! Europe) in Germany! As you can imagine, we are very excited about this! As a result of the extra publicity, Chirp Europe has entered the Top 100 of all paid apps in Austria, the Netherlands & Sweden. Thanks to all Chirp fans for making this happen!
Posted by spiny at 16:58 No comments:

The latest update for Chirp! Europe is now available in the AppStore! The main additions are two new features - a simple search, and a way of listing favourites, both features that have become more and more necessary as the list of birds continues to increase. In order to add these features, other changes were necessary - for example, the various option buttons needed more room, so they have been moved off-screen. This has the advantage of making the screen look less cluttered, and the buttons can be larger, but the downside is that two taps are now needed in order to change the sorting method. Sorting is now alphabetical by default, and there have also been changes to the database to make it easier to add new languages in future.
These changes will be included in the next update to Chirp! USA (unless I get a lot of negative feedback!).
Posted by spiny at 10:38 No comments:

Happy New Year to all Chirp! fans!
We are still working hard on the next update. I hope all the problems will be fixed soon, so we can get it out and get on with the next update, but we are still seeing an occasional mystery crash (or two). As soon as these are fixed it will be off to Apple, and we can move on to the next update and also carry on with the Bird Guide.
Here's to great things in 2010!
Posted by spiny at 17:45 2 comments: