The Great Indie Bake Off 2008 Results are in! We didn't win, but our cake came second, got a special mention and was declared the "true champion" by organizer Gavin Bowman of Antair Games :D. The winners, Appy Entertainment, had outsourced their cake to the local bakers and had requested to be in a category of their own. So although they were the overall winners, we share their glory! (Drat, should have reminded more friends to vote ;)). Thanks again to Gavin at Antair, 148Apps and everyone else involved for a fun contest.

To celebrate this occasion, we are giving away promotional codes for free copies of Chirp! Remember that they are only redeemable in the US store, and it's an app about European birds ;). Email spiny@spinysoftware.com if you'd like a code.
Posted by spiny at 08:39 No comments:

Last week's update added an info screen and an email link to Chirp!, as well as updating some of the bird data. I'm trying to keep updates to a minimum while we prepare our major update to version 2.0, but that is still a while away, so next up is another small upgrade to add Irish Gaelic names and comments! Huge thanks to Mícheál Ó Caoinleain for the hard work he put in on this.
Here's a taste of the new translation. This is about the Starling:
Tá ceol na Druide fíor-ilchineálach agus cuimsíonn sé aithrisí ar an uile shaghas fuaime, mar shampla; ceiliúr éan eile is aláraim ghluaisteáin. Éist an clic-clic sciobtha a dhéanann sí lena gob.
It's a shame that it can't be a full translation of the whole interface but it looks as though the limitations of the iPhone prevent that at the moment. I hope someone will let me know if there is a way around this.
In other news, it seems to be official that we have sold Chirp! to every Swiss iPod-owning bird lover! Sales there have dropped sharply and we've lost our #1 spot in Education. Oh well, we knew it was inevitable, and at least we are still in the Education Top 20 in several countries.
Posted by spiny at 16:50 No comments:

We've been busy over the past few days making our entry for the Great Indie Bake Off, held by Antair Games. Memories of the last time we made anything in icing had faded, and we thought "That'll be fun!". Heh, we'd forgotten how difficult it is to mould fondant into shapes before it dries/crumbles/gets too soft/falls off/snaps etc. The birds are cute though - made and painted by Miranda. :). 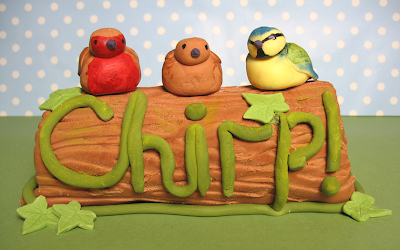 What a nice way to start the New Year - Chirp! is #1 app in the Education category in Switzerland!
Posted by spiny at 23:28 No comments: